Demonstration and Commemoration of the Start of the Syrian Revolution

At this juncture and regarding the described commemoration, I do not consider it correct and opportune to air my own views, impressions and policy proposals on the Syrian conflict. Here I just wish to show my general support and admiration for the resilience of the Syrian people fighting and yearning for freedom, at home and abroad. 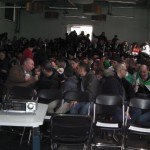 I was present at both interrelated events as a symphatizer, analyst, and as chairperson of the International Committee for Humanitarian Intervention (www.ichuminterv.org) and chairperson of the Political Committee ‘Stari Most’ for justice and peace on the Balkans  (www.starimost.nl). What follows is my translation of the Syrian Committee’s own Dutch text on:

www.syrischecomite.nl/Archieven/tabid/89/Article/406/Default.aspx (acc. 4 April 2016). The responsibility for any errors or inaccuracies in the translation are mine. Link to Facebook (for photos used): https://www.facebook.com/syrischecomite/photos. 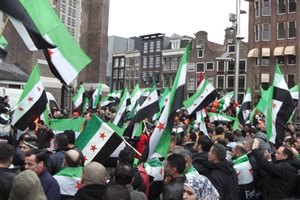 “On Sunday, March 20th more than 400 people attended [were present at] the demonstration of the Syrian Committee of the Netherlands in Amsterdam. This demonstration was held to commemorate the beginning of the Revolution in Syria on 15 March 2011.

With banners and speeches it was made clear that the audience still believe in a free Syria, where there is room for everyone, regardless of religion, ethnicity or political affiliation. At the same time great attention was given to the many victims and with photos participants called attention to the Syrians who are held prisoner by the Assad regime.

Immediately after the demonstration, a meeting was held in the Amnesty House Amsterdam [the headquarters of Amnesty International in the Netherlands. Ed.]. This meeting was organized by the Syrian Committee together with Amnesty International [www.amnesty.nl. See especially www.amnesty.nl/nieuwsportaal/pers/herdenking-vijf-jaar-syrische-opstand. Ed.] and the peace organization PAX [www.paxforpeace.nl. See especially www.paxforpeace.nl/stay-informed/news/siege-watch-report-over-1-million-syrians-living-under-siege. Ed.].

More than 230 participants attended this meeting. To our great regret, not everyone could go inside, the room was too small and the fire safety regulations do not allow for the maximum number of people to be exceeded.

Although there appear to be small bright spots, the attendants were in agreement that still no peace in Syria could be expected in the short term. An important aspect to it is the question whether Iran and Russia wish to exert enough pressure on the Assad regime to arrive at real negotiations. And the question to what degree Russia America can reach an agreement.

In Syria and the region currently several wars are being waged at once, whereby many and complex interests play a role. As for the reception of refugees by Europe, the speakers had little confidence in the deal that has now been concluded between Turkey and Europe. The deal seems especially of political importance, but absolutely does not reflect the needs of the refugees themselves. Amnesty will monitor to the best of its abilities the consequences of the deal between Turkey and Europe and examine whether the rights of refugees are being violated.

The call by Mark Rutte [Dutch Prime Minister. Ed.] to the refugees to stay home was deemed very unjust by the attendees [presenters and people in the audience Ed.]. It seems that the Dutch Prime Minister is hardly aware of the reasons on why people flee from Syria. Must you stay at home and wait for the bombs fall on your house?

The meeting was concluded with music and poetry. 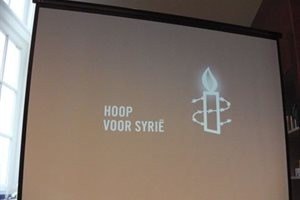 During the meeting, a photo was shown of candle of Amnesty with the text ‘Hope for Syria’. Despite the desperate situation of recent years the belief in a future for a free and democratic Syria remains strong.

The Syrian Committee in the Netherlands thanks everyone who has contributed to make this demonstration and commemorative event a special occasion.” 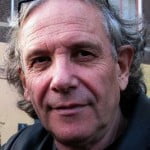 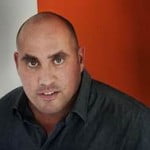